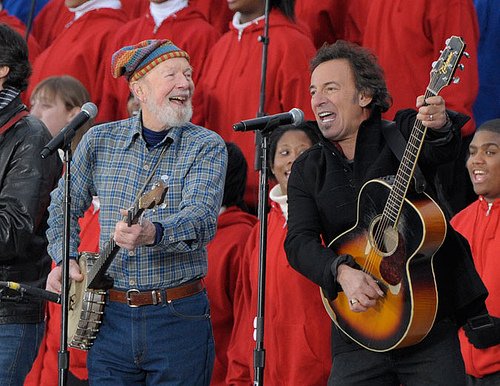 Pete Seeger is the guy who I saw when I was 8 years old that inspired me to want to make music and tell stories in such a way as to leave the world a better place.

Here’s a song I wrote a while ago to the “Pete Seeger in my Mind”. I was at a place in life where it was incredibly painful to sing my songs in public. All I’d ever wanted to do since I was 8 years old was write and sing songs for people to enjoy. But getting people to actually listen to songs they had never heard before seemed increasingly daunting.

Pete Seeger is inspiring to us because he has lived and continues to live an authentic life in his own way.

I realized at the time of writing this song that I had to stop trying to be like Pete Seeger and start being authentically myself.That realization led me to set the whole music thing aside for awhile in order to do the challenging work on myself that eventually led me to study NLP…

I heard a great quote once: “God’s delays are not God’s denials.” So many years later my music is starting to be heard around the globe via the internet…

Heroes are wonderful. What’s even better is striving to become like them without abandoning our own uniqueness…My challenge to you today is become your own hero!

Now I see I’m nothing, a speck out in the void
And you know? I feel much lighter and so very much less annoyed
Now I’m ready to move onward, I’m ready to be new
And most of all I’m ready to stop trying to be you!

All I Wanted by Mark Shepard is licensed under a Creative Commons Attribution-Noncommercial-No Derivative Works 3.0 United States License.