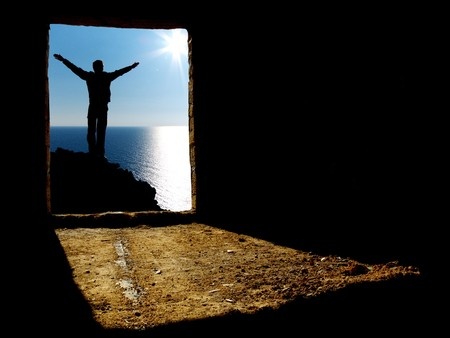 I wrote this song during the frustrating year I was at Princeton Theological Seminary studying to be a Presbyterian Minister. (don’t worry it didn’t “take” :o)

My first year studies included a course on the prophets of the old testament. I was particularly struck by the prophet Jeremiah and his hesitancy to become a prophet…

Being a reluctant prophet is not exactly the best job if you want to have much of a future or raise a family.

Little did I know it was to be a  40 year journey that would quite literally lead me to something called the “internet” where I can share these tunes to a growing audience around the world without the traditional “middle-men” of the record companies or radio broadcast networks.

As of this moment I still haven’t figured out how to pay the rent with these songs but ultimately that’s not the most important thing.

Knowing that our higher selves, or Spirit or Creator, or God or whatever you want to call it is constantly challenging us to open our hearts and say yes to a life adventure that doesn’t necessarily turn out the way we THINK it SHOULD makes singing this song particularly sweet…

Ultimately, as I have  said “yes” to this crazy songwriting “god” over 500 times, perhaps there are more “yeses” awaiting.

May you find your “yes” today in your life in your own way! Peace! – Mark

Visions of You (I Wreck My Soul)

Here I am alive but crazy lately
Writing songs that only sing to these four walls around me
What a fool. Feeling old and angry
Wanting badly to sing about anything but you
But you always win don’t you?
And there’s not a damn thing in the world that I can do

Refrain:
I wreck my soul with visions of you
And I don’t even know who you are
You call the tunes and expect me to shine
Like some firefly in a jar
There’s got to be some answers in here
That I haven’t seen and may never see
And you insist on keeping your distance
To protect your mystery…

If I could rise above my situation
I’d look you right in the eyes and demand that you give me some proof
Give me some truth. I’m tired of wondering
I’m tired of waiting and hoping you’ll show me the way
Ah but you take… your… time… don’t you?
And there’s not a damn thing in the world that I can do

You build me up. Then you knock me back down.
There are times when your Love feels just like the month of December
Then there are times when I just feel like leaving
I get ready to give it all up and then I remember
You always win don’t you?
And there’s not a damn thing in the world that I would do…

Copyright 1982-2015 by Mark Shepard. All Rights Reserved. Used by permission.