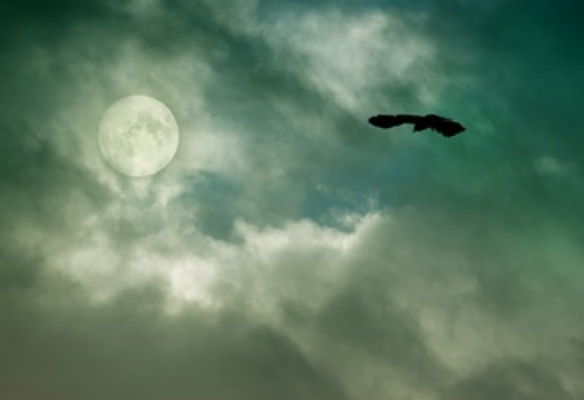 Raven is a big part of Native American storytelling. He is a trickster and the weather keeper. They are also some of the smartest creatures to share this planet with us. I imagined this Raven to be a bit of a “ladies man” but also a genuine seeker of wisdom along the way.

(Had A Conversation With The Moon)

note: verse chords are walking up bass notes on D, G to C keeping the D chord on the high strings….

Raven had a conversation with the moon
He asked her “is there a certain tune
I can sing to convince the sun to return
Without getting my lovely feathers burned?”

Raven was having dinner with a lovely crow
He said, “There are things that we both know
but we don’t know how we know,
and furthermore there is no such thing as a ‘coincidence’”
And she knew right then that he wanted to get into her…

Raven demanded an answer from the air
I can’t see you so how do I know you’re really there?
And instead of giving an evasive or defensive reply,
She simply… rolled her eyes

Raven had an argument with the wind
Can you tell me where you begin and where I end?
Are you my lover or just more than a friend?
To which the wind said “baby now that all depends….”

Raven, had a discussion with a dove
You are of the same stuff that I’m made of
But you are white and I’m black, you are yin to my yang
And he closed his eyes and opened up his heart as he sang

Raven had a conversation with the moon
He asked her “is there a particular tune
I can sing to convince the sun to go away
She looked at him and said…”not today.”