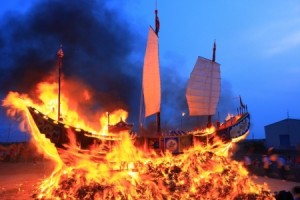 When Alexander The Great landed on the shores of Persia. He was vastly outnumbered by the Persian Army. He ordered his boats to be burned. legend has it that he said, “We either go home in Persian ships or we die!” It’s a powerful metaphor still today.

Or course there is a long story behind this song which I won’t bore you with. Suffice it to say it came out of a pretty intense personal conflict in a business relationship I was in that started out promising and then devolved into a massive exercise in ego… both mine and the other person’s.

Ultimately we don’t have time to waste on that crap!

We ALL have only a limited “engagement” here on the stage of life.

Military leaders have understood for thousands of years that warriors with their backs to the sea and no way to get back home other than fight to survive, WILL put absolutely EVERYTHING into the “task at hand”.

What if you just did one little thing towards your big dream today?

Sharing this song with you is my little step. What’s yours? Of course it could be listening to this song! LOL

Check out what other versions, videos or performances of this song: Song 403 Boats Are Burning Home Page