All Along The Watchtower-Bob Dylan Cover 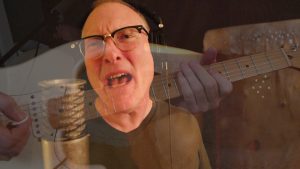 Or is it a Jimmy Hendrix Cover? or a Michael Hedges Cover? or a John Mayer Cover or a Dave Matthews cover? This post is about how it became a “Mark Shepard Cover of All Along The Watchtower by Bob Dylan.”

For the record I have NEVER been able to listen to Dylan’s version. And for this project I did NOT listen to Hendrix.

I’d had enough of other people singing this song. All I knew was that somehow I was SUPPOSED to sing this and explore this song. Don’t know why. Normally I have no desire to sing other people’s songs. That’s why I’m a SONGWRITER. If I liked most other songs, I would sing them. But I don’t. Maybe it’s a character flaw. Or maybe I’m just a freaking songwriter. LOL…

But I’m also a singer. and as it turns out I am LOVE, LOVE, LOVING this new world of playing all the tracks and creating my own arrangements. I know their not as polished as my beloved Joe Mennonna’s virtuoso arrangements. And I miss having my dear friend Gene Moore’s legendary eletric lead guitar work… but I LOVE playing all the damn instruments. so here is the process.

Step One: I played the song about 10 times and figured out the very simple chord structure. And started imagining what I wanted to play.

Step Three: I recorded a “live” pass in what I thought would be the right Key Bm.

Step Four: laid down a few ideas with piano, organ and simple percussion. Making sure I was really locking in with the Bass drum or Djun-Djun.

Step Five: Listen. Watch. Listen again. Step back. Take a few days off. I went up to  my dad’s and found myself playing the song over and over for 3 days. Discovered the key of A minor was a little easier to sing as it wasn’t all the way up against the wall of my vocal range.

Step Six: Got back from my dad’s, copied all the percussion tracks. Rerecorded the vocals and other instruments in the new key. Videoing (is that a word?) each instrument as best as I could. (forgot to hit record a few times but got a lot of the various drums and percussion visually.

Step Seven: Mix and listen.
Here’s a version of that –

Step Eight: Got my BIG drums out of my utility trailer where they’ve been sitting for 10 years and started attempting to get the “sound in my head” onto “tape” (we don’t use tape anymore but haven’t changed how we tawk about recording)… Tried the durms lit (which is one pitch) and unlit (which sounded better to my ear for this track).

Step Nine: mixed and listened. Began putting the various video shots with the music. got some great shots and started mixing them in with the lead vocal… I discovered that one of the lead guitar tracks was NOT on a video. So I decided to re-record and video tape another lead.

Step Ten: Borrowed my electric guitar back from a long term friend loan.

Step Twelve: Mix and listen. Add the new video to the visual edit.

And shazaam! Two weeks and something like 10 mixes and 7 video edits later.

Here’s what I came up with.

I hope you enjoy this.

and now back to my OWN damn songs… They are getting impatient.

Thank you so much for finding my music and sharing it with others you know who might enjoy it.