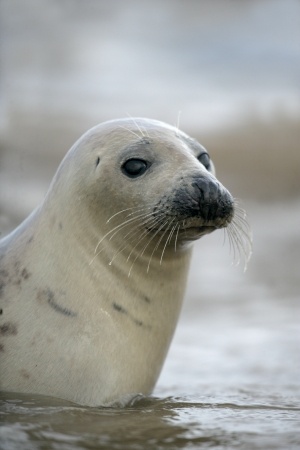 About This Song: (lyrics below)

This song is part of  my CD, “Breathing Underwater: Drums, Songs & Stories About The Sea”. Traditional Irish stories abound of the magical seals that come to shore, and take off their seal skins to become human. If a human stole or hid their seal skin or “silkie” they had to stay in human form.

I love closing my DrumSongStory family concerts and School assemblies with this piece because it seems to touch a deep hearted “Chord” with all ages. I’ve had kindergartners so mesmerized by this story-song that you could hear a pin drop. I’ve had cynical 8th Graders moved to tears by it… Needless to say it works well with adults and mixed age audiences as well…

Note: I also more recently wrote a totally different song where the “Silkie” or “Selkie” was a male “caught” by a human woman. The Selkie Man

One northern summer day,
He was paddling his way
Through the tiny islands
Not far from shore
When what did he espy
From his hunter’s practiced eye
But a maiden dancing on t he rocks
So wild and pure

But the sun was in her eyes
And he caught her by surprise
After he had hidden her seal skin
She was a Silkie you see,
A magic creature of the sea
Who sometimes come ashore
To walk in human form

Refrain:
Oh to be a Silkie of the sea
Oh to be a magic creature swimming free
Oh to know the secrets of the foam
Oh to love the ocean and to call it home

She begged to be let free
But he said, “please come with me”
Seven years from now your skin I will return
So sadly she obeyed
And turned her back upon the waves
Took a path that led her to an early grave

in the passing of the days,
She gave birth to a babe
A human son with web between his toes
But she’d begun to fade
And to wither all away
A little more with every single passing day

Then one night the child awoke
To a strange unearthly note
A sound from deep beneath
The moonlit sea
It was old grandfather seal
A legend, now made real
Calling to his own
To bring his daughter home

Well, the boy took it to her
and she slipped into it’s fur
And once again her eyes
Were full of life
She was a Silkie you see
And would have died if not set free
She was never meant to be a human wife

Copyright 1998-2015 by Mark Shepard. All Rights Reserved. Used with permission.